The Bangalow Poultry Club was started in 1924, with very little records or information available.


The Club was then known as the ‘Bangalow Poultry, Pigeon, Canary and Dog Society’ and the annual exhibition was held on a Wednesday and Thursday in the Agriculture and Industry hall on the Bangalow Showground.

Portable pens were used and members gathered dry grass and straw from the paddocks to place in the pens.

In 1924 through to the early 1960s Jack Johnston of Newrybar was a very successful exhibitor of Large white Leghorns and Large Langshans winning many awards. Hubert Grey also from Newrybar and a breeder of Large Brown Leghorns, and Jack Johnston were the initial members.

Mr. A.C. O’Meara was honorary Secretary at the time the club was formed in 1924 and records show that up to 431 exhibits were received.


In 1925 the Annual Show was held on Wednesday 6 and Thursday 7 May, and it was interesting to note some of the SPECIAL PRIZES:

No 6: Champion Bird of Show – Gold Medal valued at 4 pounds 4 shillings donated by G.Reading. In 1924 this was won by E.W.Flower, whose memorial pen is still in the Poultry Pavilion today.


The Bangalow Poultry, Pigeon, Canary and Dog Society continued to run each year until the beginning of Second World War. I believe the show closed because of the war years, just how long no one can tell me but it was presumed two or three years.

In August the same year further developments suggested that the newly built industrial Pavilion be made into a Poultry Pavilion. It was then suggested by the late Theo Grey that the club approve the A&I Society suggestion that the poultry would have the industrial pavilion and all bantam pens be 18 inch square x 3 tiers high and 18 inches from the floor. All large pens be 2 foot square x 2 ties and 2 foot from ground level and all fronts be purchased from Red Comb.


It was 18 December 1971 when Hec McKenzie thought it a great idea to have memorial pens in Charlie Law, Harry Young, Hubert Grey, and Ted Flower names. These pens are still in the pavilion today.


Theo and Ted Grey (now both deceased) from Byron Bay were active members of the club with the Grey brothers being life members since the 1980s. Other life members include Col Barnes (1970's), Bevan Burnham (1970), Hector McKenzie (1990) and more recently Dean McKenzie (2011). Hec McKenzie was president before Ian Grizzel, Dave Jupe and the present president Barry Simpkins. 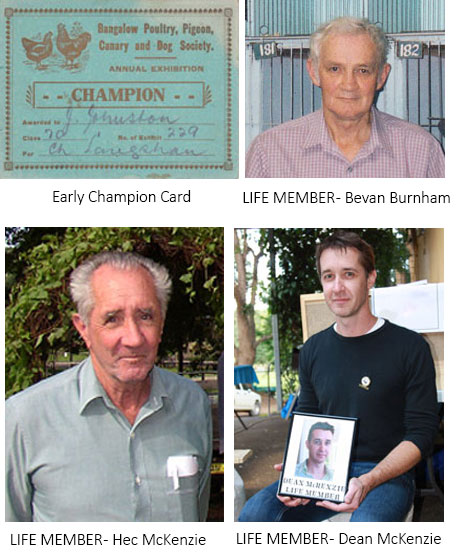